These substantial earthworks were built in the early 12th Century by the Bishop of Winchester, brother of King Stephen. The site controlled the crossing of the River Avon close by.  Within the banks, it is probable that the buildings and defences of the castle were built of wood, although this is subject to some debate.  When walking through the site, you will see the inner ditch and the remains of the outer ditch, which would have run all the way round the site to the River Avon which formed the principal defence on one side.  The two mounds in the centre of the garden are the remains of the castle keep or motte.  The area between the ditches, the bailey, would have been used for livestock and living space in times of trouble.

The Earl of Salisbury captured the castle by stealth in 1147.  He described it as being “most plentifully stocked with provisions and admirably equipped for defence”.  However, the Bishop laid siege to the castle and starved them out.  Shortly after he died in 1154, the fortifications were destroyed.  Its history is then uncertain until about 1700 when Moot House was built.

The earthworks were landscaped in about 1725 as a pleasure garden for the house.  It is thought that Bridgeman may have been the architect for these gardens. The principal feature of the garden was the planting of trees, mainly beech, elm and yew.  There are walks on top of the banks and along the ditches which contrive to make the site seem larger than it really is.

The amphitheatre, a rarely surviving garden feature, is formed by six tiers of grass.  The Temple of Mercury, a hexagonal Greek-style temple, provided a dramatic focal point at the top with views over the amphitheatre to a clover-leaf fish pond, behind which was an Italian-style loggia built in the 1890s.  This replaced an earlier Gothic building.  Sadly both these buildings were destroyed in the 1970’s.  Plans are being made to replace them.

Across the Lime Avenue which runs through the centre of the site is Bevis Mount from which there are fine views over the village and surrounding country side including Cranborne Chase and Clearbury Rings (an Iron Age hill fort). 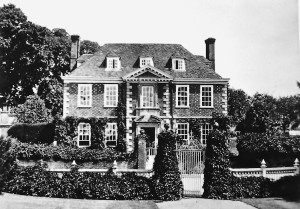 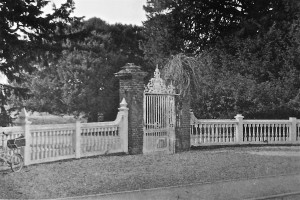 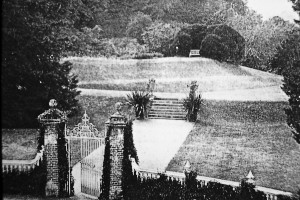 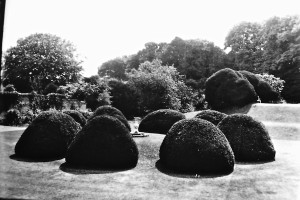 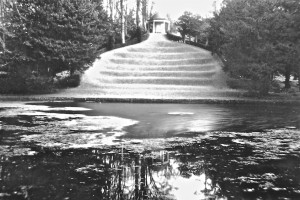 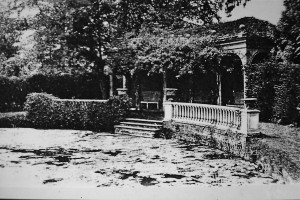 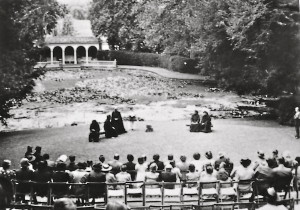 Production in the amphitheatre 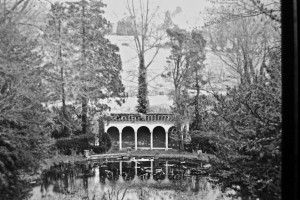 Loggia from the amphitheatre

In 1972 the ownership of the garden was separated from Moot House. Over the next fifteen years, many structures were destroyed and the gardens became totally overgrown with brambles, scrub and trees.  Further major damage was caused by Dutch Elm Disease and the storms of 1987 and 1990. In 1988, local residents formed a charitable trust which, with the help of Salisbury District Council and the Countryside Commission, acquired the property.  After making the site safe and clearing the undergrowth from the main areas, a survey was carried out. After much debate it was decided to restore the main features of the landscape garden as recorded in Country Life in 1909.  A summary of the acquisition, renovation and formation of the management trust can be read in a short publication from 2016.